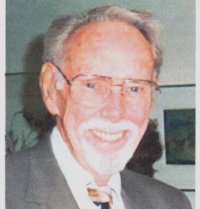 Charles Lincoln Gillham of Latonia, KY, passed away on January 1, 2013, at age 92. Charles was an artist, working primarily in watercolor, as well as a talented pianist. He was a WWII veteran. He exhibited his artwork in Greater Cincinnati, and was represented by two galleries in Florida, where he lived after retirement from a career in commercial art. An alumnus of Holmes High School, class of 1938, he remembered the old “Holmes Castle” which was demolished in 1936. Fifty years later, he painted a large watercolor of the castle, which he donated to the school. He also created a series of cards featuring drawings of Ritte’s Corner, old Latonia Racetrack, and Holmes Castle. He was inducted into the Holmes High School Hall of Distinction in 2010. Charles studied art at Ohio College of Applied Science, where he had a teacher who studied with Duveneck. He started working at Strobridge Lithographing Company, one of the country’s most renowned stone lithographers, especially famous for its circus posters. After WWII, he studied at the Cincinnati Art Academy where he met his wife, Marcia. They were married for over sixty three years. He opened a a freelance business called the “Studio of Headings,” for which he helped develop an innovative hand-lettering system. For thirty years he worked at Mott Studios, where he was a designer and lettering artist. He and Marcia raised two children in Ft. Mitchell, then retired to Florida where they both enjoyed success with their painting. He enjoyed painting on the beaches, and sipping gin & tonic at beachside taverns. He especially enjoyed the warm winter weather. In 2000, he and Marcia moved back to a rehabbed historic home in Latonia, near their daughter. From his studio window, he looked out on the house where he was born on April 12, 1920. Since his return he created a design for a Latonia welcome sign executed in tile mosaic, located at E. 36th Street and Decoursey, and a similar design for banners displayed at Ritte’s Corner. He is Survived by his Wife: Marcia; Daughter: Lisa; Son: David (Ludmilla) of Massachusetts; and 2 Grandsons. Visitation will be from 2:00 pm to 4:00 pm with services following on Friday, January 4, 2013 at Connley Brothers Funeral Home in Latonia, KY. Burial will follow at Highland Cemetery in Ft. Mitchell, KY.

P.T.L.!
Dear Marcia and Lisa,
I want to offer you all my prayers and sympathies in the passing of Charles. It was a blessing to sit and pray with you all, and to get to share with you on New Year’s Eve. Thanks for sharing your lives with me. May our Lord Jesus Christ bless you with His peace.
Sincerely,
Bro. Gary

We have lost our oldest and best friend. He was dear to us in life and will be to the end of our days.
Our prayers go on for Marcia, Lisa, David and Ludmilla and the grandchildren. He dearly loved his family and was so proud of them.