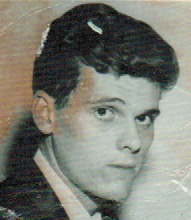 Donald L. Baynum, 71, of Maysville, KY passed away on Tuesday, September 8, 2015. He was a Veteran of the U.S. Air Force serving during the Vietnam Era. Donald was a self employed Dry Wall Finisher, an animal lover and an avid baseball fan. He was preceded in death by his Parents: Wilbur and Louise Baynum and Brother: Steven Baynum. Donald is survived by his Daughters: Shannon Spears and Jennifer Spicer; Grandchildren: J. Tyler Spears, Travis Spears, Abbiegayle Spicer and Aleiah Spicer; Sister: Debra (Dean) Applegate; Brother: David (Connie) Baynum and Several Nieces and Nephews. Visitation will be on Monday, September 14, 2015 from 10:00 AM until the Honor Guard Service at 11:00 AM at the Highland Cemetery Chapel, 2167 Dixie Hwy., Fort Mitchell, KY 41017. Interment will be in Highland Cemetery. Memorials are suggested to the Charity of the Donor’s Choice. Online condolences may be expressed at www.connleybrothersfuneralhome.com.