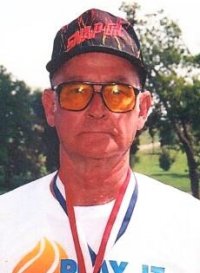 Earl LaVerne Ryan, 86, of Taylor Mill, passed away on January 7, 2012 at the St. Elizabeth Hospice Center, Edgewood.
Verne graduated from Walton-Verona High School in 1942 and was a decorated World War II Army Veteran, serving as a Staff Sergeant in the European theater. He retired as a machine operator at the Nu-Maid Margarine Company in St. Bernard, Ohio. After retiring, he was an avid sportsman in archery and bowling. In his younger days, he was a semi-pro baseball player for Walton and Verona, KY teams.
His mother, Naomi Waller Ryan and father, Charlie Ryan, preceded him in death, as did three of his brothers, Wendell, Clifford, and Mike Ryan, and his sister, Joyce Ryan Readnour.
Survivors include his wife, Emma Lou Kinman Ryan; six children, Dennis Michael Ryan (Janice) of Cincinnati, Timothy M. Ryan (Dorothy) of Villa Hills, Patrick K. Ryan (Susan) of Farmer City, IL, Shauna C. Ryan of Villa Hills, Tracy M. Ashworth (Scott) of Union and Kerry K. Ryan of Independence, KY; brothers, Walt Ryan (Jan) of Verona and Bob Ryan (Lynelle) of Washington, IL; 22 grandchildren and 7 great-grandchildren.
Visitation will be from 10:00 AM – 12:00 Noon Wednesday, January 11, 2012 at Connley Brothers Funeral Home, 11 E. Southern Ave., Latonia, KY with the funeral immediately following. Burial will be at New Bethel Cemetery, Verona, KY.
Memorials are suggested to the American Cancer Society, 297 Buttermilk Pike, Fort Mitchell, KY 41017 and/or the St. Elizabeth Hospice Center, 483 South Loop Rd., Edgewood, KY 41017.

Open cskteas sometimes can leave a bad last image of the person in your head. You imagine one thing in your head before you go to the viewing and if its a open casket it can completely change the image for you. I’m still not sure if I would want a open casket or not.

Know you are in our hearts. I was recently told it is better to lose someone treasured than to never have experienced the treasure at all. True, however it doesn’t make the loss any easier of your Dad/Peepaw. Love to all…..Thomas, Karen, Elise and Annie