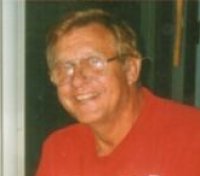 Edward (Ed) William Ruebusch, age 77 of Latonia, KY passed away on Friday, September 21, 2012 at St. Elizabeth Health Care in Edgewood, KY. He Retired from Pepsi-Cola as a Route Salesperson after 37 years of service. A member of Holy Cross Church in Latonia, KY, He and his son, Eddie enjoyed owning and racing Thoroughbred Horses, enjoyed vacations with his family, especially his grandchildren in Ocean City, Maryland. An Army Veteran. Ed and his Wife, Sue Carol Seligman Ruebusch, were married on June 20, 1959 and she lives in Latonia, KY; Ed is also survived by; Daughter: Tammy (Robert) Gray of Villa Hills, KY; Son: Eddie Ruebusch of Latonia, KY; Sister: Mary (Russell) Martin of Virginia; Brother: Tom (Peggy) Ruebusch of Ohio; 3 Grandchildren: Brittany Ruebusch Huffman, Robby Gray and Ashlee Gray; 2 Great Grandchildren: Carson Ruebusch and Roxanne Sue Broadway. The Visitation will be on Thursday, September 27, 2012 at Connley Brothers Funeral Home in Latonia, KY from 4 PM until Prayers at 7 PM. Mass of Christian Burial will be on Friday, September 28, 2012 at Holy Cross Church in Latonia, KY at 10 AM. A Honor Guard Service and Entombment will be in Mother of God Cemetery in Fort Wright, KY. Online Condolences may be made at: www.connleybrothersfuneralhome.com.

We are so sorry for your loss,Ed was a good. man,you are all in our prayers.