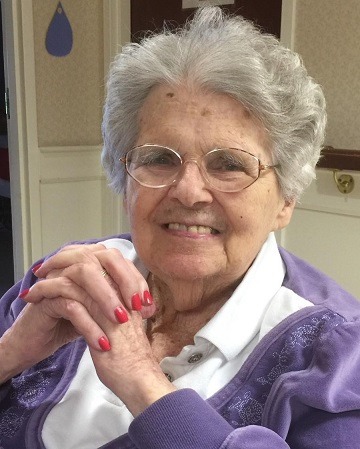 Ella Jane Dierckes (nee Barton), age 101, passed away on May 18, 2018. She was preceded in death by her husband of 66 years, Albert C. Dierckes, Sr., parents Chester and Sarah (Sadie, nee England) Barton, daughter-in-law Claire (nee Etienne) Dierckes, granddaughter-in-law, Lori (nee Hofmann) Dierckes, and one great-grandchild, Stephen Sager. She is survived by her son, Albert C. Dierckes, Jr., five grandchildren: Albert C. Dierckes, III (Lori) of West Linn, OR; Kathryn Sager of San Jose, CA; Stephen Dierckes (Carol) of Westfield, IN; Anne Kirkpatrick (Don Hank) of Salem, OR; and Mark Dierckes of Hope, ME; and fourteen great-grandchildren.
Jane was a life-long resident of Northern Kentucky and member of St. Mark United Church of Christ. She graduated from Holmes High School in 1934, attended business college, and worked alongside her husband in their grocery store in Covington for many years.
Jane was descendant of General William Barton of the Revolutionary War and was a member of the local chapter of the Daughters of the American Revolution. She was also a member and held offices over the years in the Colonial Dames XVII Century Society. Prior ancestry includes John Alden and Pricilla Mullens of the Mayflower, and thus Jane was also a member of the Society of Mayflower Descendants. Her ancestral record can be traced back to the early years of the millennium in England.
Jane and her husband traveled extensively, including one lengthy trek around the world. Jane was an avid reader and enjoyed quilting, knitting and other hand-crafts.
Visitation will be held at Connley Brothers Funeral Home, 11 East Southern Avenue, Covington (Latonia) KY, 41015 at 10:00 a.m. until the funeral service at 12:00 p.m. on Tuesday, May 22, 2018. Interment will be at Highland Cemetery, Ft. Mitchell, KY immediately thereafter. In lieu of flowers, contributions would be appreciated by St. Mark United Church of Christ, P. O. Box 15141, Covington, KY 41015, or the Colonial Dames XVII Century Society (via Mrs. Kenneth Bosch, 3045 Bellflower Ct., Edgewood, KY 41017) or the National Society of the Daughters of the American Revolution, 1776 D Street NW, Washington D. C. 20006.
Online condolences may be expressed on Facebook or at ConnleyBrothersFuneralHome.com

A beautiful woman has left us. Mrs. Dierckes’ sweet, loving nature remains with her family, a blessing to all. I hope to attend her services Tuesday; she and the Dierckes famly are in my thoughts and prayers. Rest in peace, Mrs. Dierckes.