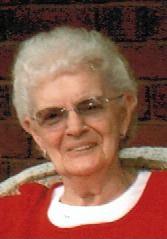 Garnetta Whalen, of Erlanger, KY, passed away on Wednesday, November 1, 2017. She was a member of the First Church of God in Latonia, KY and retired as a Switchboard Operator with St. Elizabeth North. In her younger years, Garnetta was an accomplished bowler who loved Bingo, cards, crocheting and collecting dolls. During WWII, while her husband was in the military, she was a member of the KY Women’s Army Auxiliary. Garnetta was preceded in death by her beloved husband: Melvin Whalen. She is survived by her daughter: Joy (Frank) Bettis; sons: Melvin (Linda) Whalen, Jr., James (Karen) Whalen and Steven (Marla) Whalen; 9 grandchildren and numerous great-grandchildren and great-great-grandchildren. A Visitation will be held on Monday, November 6, 2017 from 11:00 A.M. until the Funeral Service at 1:00 P.M. at Connley Brothers Funeral Home, 11 East Southern Avenue, Covington (Latonia), KY 41015. Interment: Highland Cemetery. Online condolences may be expressed on Facebook or at ConnleyBrothersFuneralHome.com