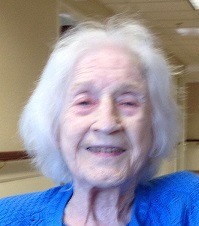 Hilda M. Kloenne, 102, of Ludlow, KY passed away on Monday, December 1, 2014 at Baptist Village Care Center in Erlanger, KY. She retired from Western and Southern Insurance Company in Cincinnati, OH in 1972 after 40 plus years of service. Hilda was a member of Sts. Boniface & James Church in Ludlow, KY. She enjoyed spending time with family and friends and was a devoted daughter to her late Parents Frank and Teresa Kloenne. She was also preceded in death by her Sisters: Marion R. Bogner and Ruth Webster; Brothers: Robert Kloenne, Art Kloenne and Frank Kloenne. Hilda is survived by her Sister-In-Law: Loraine Kloenne and several Nieces and Nephews. Visitation will be Monday, December 8, 2014 from 10:00 AM until Mass of Christian Burial at 11:00 AM at Sts. Boniface & James Church 304 Oak St. Ludlow, KY 41016. Interment will be at St. John Cemetery in Fort Mitchell, KY. Memorials are suggested to the Charity of Donor’s Choice. Online Condolences may be expressed at www.connleybrothersfuneralhome.com.

So sorry I am unable to attend Hilda’s service. Hilda was at every family get together with Norma and I enjoyed her witt and great personality. Hilda, Norma and I spent a lot of time together on Wednesdays when they were able. Great memories of shopping and out to eat. I know she’s with The Lord and her family in heaven. God bless her.

Hilda was a pleasure to know and will be truly missed by Evelyn Harney as well as the Harney family. It was truly a joy to listen to her stories she shared as a child and her life in general. May God rest her soul and give her peace.