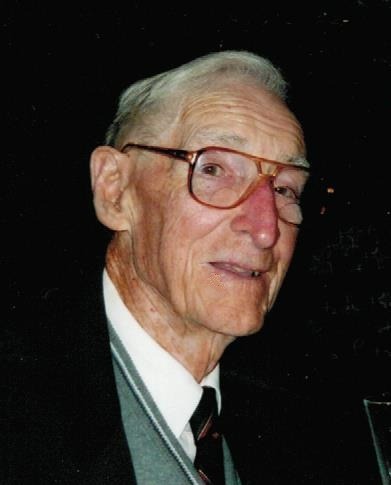 John G. (Jack) Grayson died October 29, 2013 at the age 0f 97 years. He was a resident of Madonna Manor in Villa Hills, Kentucky. He was born in Covington and lived in Miami, Coral Gables and Ocala Florida for 65 years. His beloved and wonderful wife, Helen (Jibbs) Mueller Grayson died in 1994 after 53 years of marriage. Brother C. Merwin Grayson, Sr., died in 1996. He is survived by his nieces and nephews, including Jill Grayson Will, Mary Jo Hardcorn and Merwin Grayson, Jr.
He retired from the military in 1946 as First Lieutenant, Medical Administrative Corps and in 1978 retired as Vice President of an Accounting Division with Eastern Air Lines in Miami, Florida.
From 1946 through 2010 he actively participated in organizations assisting the poor and needy. In Miami, he served St. Michael Parish from 1946 through 1954, St. Theresa in Coral Gables from 1954 to 1979, followed by Blessed Trinity in Ocala from 1980 to 2010, where he retired at 95 years of age and received an appreciation award for 30 years of service with Brother’s Keeper, a ministry of Blessed Trinity Catholic Church.
In January 2011 he returned to Northern Kentucky and became a member of St. Pius X Catholic Church in Edgewood, KY where a Funeral Mass will be said by Father Thomas Robbins on Saturday, November 2, 2013 at 10 AM. Entombment will follow in St. Mary’s Catholic Cemetery. Memorial contributions are suggested to Brother’s Keeper 5 SE 17th. Street Ocala, FL 34471. Online Condolences may be left at www.connleybrothersfuneralhome.com

what a great gentleman; we knew Jack from Golden Hills in Ocala,Florida and his great work at Brothers Keeper of Trinity Catholic Church. Fondest memories of his evenings at Golden Hills surrounded with the Dear Widows who all adored him and enjoyed an evening of dining with him. He really was a perfect gent. And, now he is in heaven free of all pain and most likely surrounded by all the Angels….

My sincere sympathy to the family on the passing of Uncle Jack. He was such a lovely gentleman and I am happy that I had the pleasure of meeting him . A long life so well lived.

Please accept my condolences on the loss of your dear loved one. Take comfort in knowing that our heavenly Creator will soon remove all pain, sorrow, and death forever! May this promise as recorded in Revelation 21:3,4 be of comfort to you as you gain the strength and inner peace to cope with the days ahead. Philippians 4:13.

Please accept my sincere sympathy at the passing of Jack. I became acquainted with this fine gentleman while visiting my Mother at Madonna Manor. Jack was delightful, and I am honored to have known him.