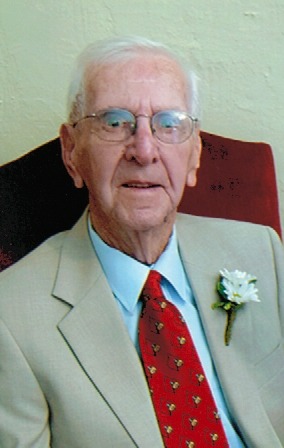 John “Jack” Wells, age 93 of Taylor Mill, KY passed away on February 13, 2014 at Providence Pavilion in Covington, KY. He Retired from the L & N Rairoad as a Clerk at Decoursey Yards. In his younger years he worked at the Latonia Race Track and was a lifelong fan of Thoroughbred Horse Racing. He was a strong supporter of Little League Sports and an avid Golfer. He was a Volunteer and later Retired from Avis after his Railroad years. Jack was a Honorable Kentucky Colonel, Volunteer for Holy Cross Bingo and Be-Concerned, former Treasurer with the L & N Credit Union, 17 years as Owner of Jack’s Delicatessen in Taylor Mill, KY and he was also a Volunteer Fireman with Forest Hills and Winston Park. Jack was preceded in death by his Wife: Rita Theresa “Boots” Wells in 2000 and a Son: Tim Wells in 2012. Jack is survived by his Daughters: Stephany (Bill) Ivers and Peggy (David) Federmann; Sons: John R. (Barb) Wells,III, Bill (Judy) Wells and Steve (Michelle) Wells; 11 Grandchildren and 2 Great Grandchildren. The Visitation will be on Sunday, February 16, 2014 at Connley Brothers Funeral Home in Latonia, KY from 1 PM until Prayers at 4 PM. Mass of Christian Burial on Monday, February 17, 2014 at St. Cecilia Church at 11 AM. A Honor Guard Service and Interment will take place at Floral Hills Memorial Gardens. Memorials to: Charity of the Donor’s Choice. Online Condolences may be expressed at www.connleybrothersfuneralhome.com.

Wells Family,
My sincere condolences to all of you. Jack was an adorable kind man. My family enjoyed his time at our family gatherings. He always had a smile for everyone and will be remembered that way.

Stephany – So sorry for your loss, yet so thankful for such a long wonderful life your father had. I always enjoyed talking to him at your house. He was a wonderful man who “lived” his life fully. Thinking of you and your family with sympathy.
Donald, Tammy & Zachary Dowden

Peggy and family, I am so very sorry for your loss. I pray for your comfort and peace.

Stephany–
Life is filled with many blessings; among them is a good death. I’m taken with you Father’s courage as death came to him. Know that I will remember him (and you all) at the altar.

Sending many hugs and prayers to all of you. Jack will always hold a special place in our hearts! Brad, Karen, Austin and Abby

Uncle Jack will be sorely missed. He was a great man. Our thoughts and prayers are with the family.

I am so sorry for your loss. At this difficult time please remember the Bible’s promise at Acts 24:15, “There is going to be a resurrection.” May the God of all comfort, comfort you in all your trials. – 2 Corinthians 1:3,4