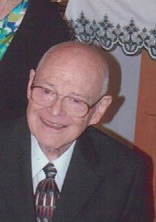 Joseph L. Hils, Jr., 86, of Fort Mitchell, KY, passed away on Monday, January 30, 2017. He proudly served his country in the U.S. Army during the Korean Conflict. Joseph was a member of Blessed Sacrament Church, he was the owner of the former Ben Franklin Department Store in Latonia, KY and he later sold real estate. He was preceded in death by his wife of 60 years: Mary Eileen Hils, who passed away on November 17, 2014. Joseph is survived by his daughter: Nancy (David) Igel; brothers: Ray (Carol) Hils and David (Eleanor) Hils; grandchildren: Matthew, Jessica and Julianne and several nieces and nephews. A visitation will take place on Friday, February 3, 2017 at Blessed Sacrament Church, 2409 Dixie Highway, Fort Mitchell, KY 41017 from 4:00 P.M. until Mass of Christian Burial at 6:00 P.M. Interment: St. Mary Cemetery on Saturday, February 4, 2017 at 9:00 A.M. Memorials are suggested to a charity of the Donor’s choice. Online condolences may be expressed on Facebook or at ConnleyBrothersFuneralHome.com

I was sorry to see Joe’s obit in the paper this morning. Joe gave me my first job after high school @ Holy Cross. He made it possible for me to pay my way through college at Villa Madonna/Thomas More.

Nancy and David. We offer our condolences on the loss of your dad, Nancy. The few times we met him we enjoyed his conversation. He was a sweet man. I know you will miss him.

So sorry for your loss. My mother was one of the original employees at the Ben Franklin Srore (Alleyne Stonestreet). Joe and Eileen were residents of an apartment building where my family lived before they built their home. I have many fond memories of the time we were a part of the Ben Franklin family including Joe;s Mom and Dad.

Nancy, I was so sorry to hear about your dad’s passing. I liked your dad, and it was a pleasant surprise/coincidence that I got to see him again after working for him when I was 17.
My sincere condolences to you and David and the kids.