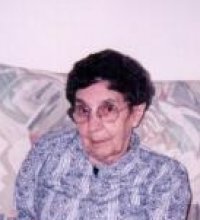 Mildred B. Purvis, age 93, of Elsmere, KY, formerly of Latonia, KY, passed away on Monday, July 2, 2012 at Woodcrest Manor Nursing Home. She worked as a Waitress at F.W. Woolworth’s for many years and was a member of the Ashland Avenue Baptist Church. She was also a P.T.A. member for 24 years and volunteered with the Community Action Commission for 4 years. Mildred was preceded in death by her Husband: Arthur Harry Purvis in 1968 and a Son: Luther Taylor Purvis. She is survived by her Son: Arthur Edgar Purvis of Independence, KY, Sister: Ann Trimble of Florida, Grandchildren: Laura Lillard and Sabrina Brown, and 6 Great Grandchildren. Visitation will be held at Connley Brothers Funeral Home in Latonia, KY on Friday, July 6, 2012 from 10 AM until the Funeral Service at 12 Noon. Interment will be in Paris Cemetery in Paris, KY. Memorial Donations are suggested to the Ashland Avenue Baptist Church 2735 Ashland Avenue Latonia, KY 41015. Online Condolences may be made at www.connleybrothersfuneralhome.com