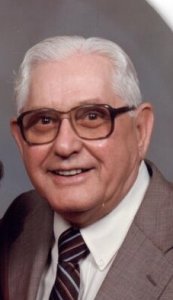 Robert David Hook
Age 87, passed away on November 3, 2011, surrounded by family, after a long fight with leukemia and heart disease. Bob was born on April 15, 1924 to Edwin and Eva Jane (Markey) Hook. Bob was a lifelong resident of Kenton County, Kentucky. Bob is preceded in death by brothers Warren, Larry and Edwin, and sister Evelyn Roenker. Bob is survived by his wife of 66 years, Ethel Mae (Creekmore), five children, David (Joyce), Stephen (Linda), Raymond (Georgetta), Nancy Gripshover, and Robert (Beth), 14 grandchildren, 4 great-grandchildren, and numerous nieces and nephews. Bob worked for 45 years as a tool and dye craftsman and shop supervisor with the Randall Company in Cincinnati. Bob was very proud of his service in the US Army artillery in World War II. Bob served as a city of Taylor Mill councilman, and judge pro-tem for the city traffic court. Bob was a long time member of the Taylor Mill Fire Department and Life Squad. Bob was one of first Emergency Medical Technicians in the state of Kentucky, and later became an EMT trainer for the state. Bob was recognized as a Kentucky Colonel for his dedicated public service. In his younger years, Bob enjoyed playing golf, bowling, and watching baseball. In retirement, Bob enjoyed woodworking and traveling with his wife around the country. Bob’s family is indebted to the fine staff at the Ester Marie Hatten Cancer Center, Dr. Lawrence Brennan and his staff, particularly his nurse Joyce, and the staff at St. Elizabeths Hospice. The Visitation will be on Monday, November 7, 2011 at Connley Brothers Funeral Home in Latonia, KY from 10 am untill 12 noon, followed by Mass of Christian Burial at St. Patrick Church 3285 Mills Rd. Taylor Mill, KY 41015 at 1 PM. Entombment and an Honor Guard Service in Mother of God Cemetery in Ft. Wright, KY. Memorials to: Esther Marie Hatton Cancer Care Center 1 Medical Village Dr. Edgewood, KY 41017.
Online condolences may be sent to www.connleybrothersfuneralhome.com

one thing in English for the West and anethor in Arabic for Muslims so does the obama administration say one thing to citizens and anethor to the rest of the word, the ones who really count to Obama. Look up the islamic concept of Taqiyya.In addition, the operation may have been run by the CIA without specific permission from Mr. Obama who might have restricted them from making him look bad to other Muslims.

Dear Aunt Ethel and Family, The world has lost one of the best men I have ever known. He was strong and kind in everything he did. My thoughts and prayers are with you. I am so sorry for your loss.
Love, Carol

Steve and Family-
All of our love and prayers are with you!
Love,
Aaron and Sarah Campbell

So many wonderful memories of Bob, what a wonderful neighbor and friend he was to our family, the Houses. Living across the street from Bob and Ethel was like living next to a second mother and father. Rod and I send condolences to the entire Hook family, and love and strength to Ethel.

Mark and I send our love to each of the family members for your loss. We loved Bob and will miss him terribly. May God give you all His peace at this time.