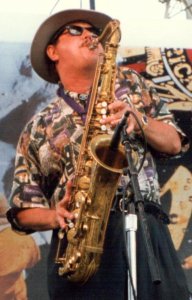 ROBERT W RODEN, 62 of Taylor Mill, Kentucky passed away January 23, 2012 at his residence. Robert “Bob” Roden was a graduate of Simon Kenton High School class of 1967. He attended the University of Kentucky, Louisiana State University and the University of North Texas where he studied music. Bob worked as a professional musician as composer, music arranger and performer of numerous instruments including tenor saxophone, flute, clarinet, and piano. A dynamic and versatile musician, Bob traveled internationally performing Jazz and Blues in Germany, Europe and Canada. Bob played many years in the North Western United States with the award winning Blues group “Lloyd Jones Struggle” as Bob “Housewine” Roden in the power packed horn duo of the Texas Tenors. During his career he performed with big name artists including, BB King, Bonnie Rait, Dr John, Earl King, Charlie Musselwhite and Robert Cray.

After retiring Bob enjoyed serious BBQing for friends, searching out the lastest technology in communications and working at the Transitions drug center helping young men. Bob also played with the Northern Kentucky University Jazz Band and Symphonic Winds and served as a positive role model and inspiration to many young musicians.

He is preceded in death by his parents Robert R and Betty Lee Roden.

Burial is Monday, January 30, 2012 at 2 PM in Evergreen Cemetery, Southgate, Kentucky. A musical tribute for Bob will take place after the burial at 5 PM at the Skyline Tavern in Alexandria, Kentucky. Connley Brothers Funeral Home in Latonia, KY is serving the family.

Online Condolences may be made at www.connleybrothersfuneralhome.com.

Good cnmemots folks. John and Tim both make a good point. And James, you made me smile, buddy. Talking folks out of weddings. I’ve go a young couple I’m sending your way. Kidding. Monalea … I always like your opinions … your point was clear on a funeral for a “saint.”As for me? I’ll tell you what I think later.

I am very sorry to hear of Bob’s passing. Such a great talent to go so soon. He takes with him an enormous musical heritage.
Kathy O’Connor

I was shocked to see the recent obituary of Robert W. Roden, Jr. I just knew it had to be the son of Robert Roden who was music director at Simon Kenton many years.
I’ve never forgotten the influence Mr. Roden, Sr., had on our small high school band during the late 50’s and early 60’s. I was privileged to perform in band from ninth grade through 12th. I played flute and piccolo.
I didn’t use my flute for many years until after I married. I continue to “speak” through music now playing in senior orchestras, doing solo work at my church and other groups. Mr. Roden was an excellent musician and went the extra mile for his students. I am so glad his son went on to continue his Dad’s love of music, and also that Mr. Roden was honored by having the Music Facility at Simon Kenton dedicated in his name. Both were truly deserving of their honors. They are missed.
Carolyn Nitschke Kemper
Simon Kenton Class of 1962

I’m so sorry to hear of Bob’s passing. I enjoyed knowing him and we at Transitions are grateful for the work he did at GLC during its opening. Our thoughts and prayers are with you.
Karen

Robert Roden Jr.
At the center of the Bible is the book of Psalms. This great collection of songs and prayers expresses the heart and soul of humanity. As you read the book of Psalms, you will hear believers crying out to God from the depths of despair, and you will hear them singing to him in the heights of celebration. But whether despairing or rejoicing you will always hear them sharing honest feelings with their God. Musicians like Robert Roden and his son Robert Roden Jr. discovered the everlasting power and love of God and His forgiveness. In their music we also share in that gift of love. The Bible tells us that everything is in its time and place and it warms my heart to know that before the death of Robert Roden Jr. he knew his beloved father was honored by Simon Kenton High School and the Kenton County School System by dedicating the Music Facility in his name with a Memorial Scholarship fund opened at any The offices of The Bank of Kentucky. When I contacted him this past year he was thrilled to know that we were pursuing the effort to honor his father and he explained his health care problems would keep him from being personally involved. We told him that he did not have to lift a hand and that we indeed would lift him in our prayers for God’s will in his battle for life.. I know that the video about his father and Simon Kenton touched his heart and the plaque honoring him before his passing was a God given gift. The Bible says that everything in its time and place as God’s will dictates. May Robert Roden Jr.’s memory and his father’s live forever in our lives through the honor bestowed upon his father for his twenty six years of service as the band director, educator for Simon Kenton High School and the Northern Kentucky Community. Both father and son created and made music which enriched our culture and brought smiles of pleasure to many different citizens and children around the world. Now they will both again play music for our Lord in Heaven.
Dr. John Stephenson
Former Superintendent of Public Instruction Commonwealth of Kentucky