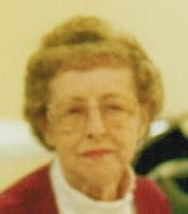 Ruby Helen Redmond, 86, of Covington, KY passed away on Sunday, August 2, 2015 at St. Elizabeth Healthcare in Edgewood, KY. She was a member of St. Mark United Church of Christ in Latonia, KY. Ruby enjoyed line dancing and recently has been attending Nicholson Christian Church in Independence, KY. She was preceded in death by her Husband: William H. Redmond. Ruby is survived by her Son: Ernie (Kathy) Redmond; Grandchildren: Kenneth Redmond and Helen Elizabeth (Joshua) Grooms and 2 Great-Grandsons. Visitation will be on Tuesday, August 4, 2015 from 1:00 PM until 2:00 PM at Connley Brothers Funeral Home, 11 East Southern Avenue, Covington (Latonia), KY 41015. Funeral Service will be at 3:00 PM at Forest Lawn Memorial Park Chapel in Erlanger, KY followed by the Interment. Memorial Service will be on Sunday, August 9, 2015 at 12:30 PM at Nicholson Christian Church, 1970 Walton-Nicholson Pike, Independence, KY 41051. Memorials are suggested to Nicholson Christian Church. Online Condolences may be expressed at www.connleybrothersfuneralhome.com.

Ruby was a wonderful person. We had many fun times and great laughs with Ruby. We love her and will miss her very much.

Deepest sympathy to the family.