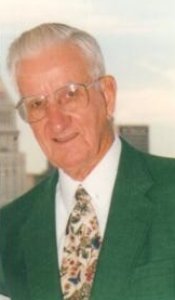 Thomas P. Jordan of Lakeside Park, KY, passed away on Monday, June 25, 2012 at age 89. He was preceded in death by his beloved Wife: Mildred (Millie) Jordan in 1997, Brothers: Jack Jordan and Robert Jordan and Sisters: Margaret Jordan and Betty Heller. He is survived by his Niece: Bette Jane Schoonover , Nephew: Timothy Bauer, Grand Nieces: Jordann and Ashley and Grand Nephew: Drake. Tom retired as Vice President of First National Bank of Cincinnati. He was a very proud veteran of World War II and fought with the famous U.S. Army’s First Division, in France, Belgium, Czechoslovakia, and Germany. He was discharged in 1945 with the rank of Staff Sergeant. Tom was dedicated to civil service and served for several years on the Lakeside Park City Council. Visitation will be held on Monday, July 2, 2012 beginning at 10 AM at Lakeside Presbyterian Church in Lakeside Park, KY. The Funeral Service will follow at Noon. He will be interred next to his wife Millie at Highland Cemetery in Ft. Mitchell, KY. Tom was a very generous man, often helping his many friends, and he contributed to many charities throughout his life. In lieu of flowers, Memorial Donations should be made to the Lakeside Presbyterian Church 2690 Dixie Highway Lakeside Park, KY 41017 and/or Disabled American Veterans 3725 Alexandria Pike Cold Spring, KY 41076. Connley Brothers Funeral Home in Latonia, KY is serving the family and online condolences may be made at www.connleybrothersfuneralhome.com

Very sorry for your loss. I will miss Tom, he was a good man and a good friend.

The members and staff of NKAPC wish to express our deepest sympathy. Mr. Jordan will be greatly missed.