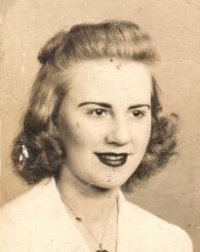 Virginia K. Meiman White, age 91, of Covington, KY passed away on July 11, 2012 at St. Elizabeth Hospice in Edgewood, KY. She was a lifetime member of Holy Cross Church and was Co-Owner of the former White’s Party Mart in Latonia, KY. Virginia was preceded in death by her Husband: Arthur M. White in 2005, Daughter: Susan Greis, and Grandson: Tevis Anthony White. She is survived by her Sons: Rock (Kathy) White of Taylor Mill, KY and Doug (Bob Bowles) White of Union, KY, Daughter: Kathryn White of Burlington, KY, Son-in-Law: Joe Greis of Lakeside Park, KY, 10 Grandchildren and 12 Great Grandchildren. Visitation will be held at Holy Cross Church in Latonia, KY on Saturday, July 14, 2012 from 9:30 AM until Mass of Christian Burial at 11:00 AM. Entombment: Mother of God Cemetery in Fort Wright, KY. Memorial Donations are suggested to Holy Cross Church 3612 Church Street Latonia, KY 41015 and Online Condolences may be left at www.connleybrothersfuneralhome.com

My deepest condolences to the White family. She was such a sweet woman! Keeping you in my thoughts and prayers.

Rock, Kathy and Doug and Kathy: we are so sorry to hear
about the passing of your Mom. She was a great woman
but now she will be with your Dad and Sue and Tevis.
Aunt Jackie and Aunt Jean .