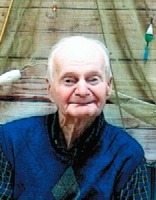 William Philip "Bill" Racke, 96, of Butler, KY passed away on Wednesday, September 9, 2020. He was a retired dairy farmer suppling milk to Trauth Dairy and a WWII Army Veteran. Bill was preceded in death by his sons: John Philip Racke and Richard William Racke and grandson John Simmie Racke. He is survived by his son: Michael Raymond Racke; daughters: Juanita Louise Racke, Barbara Evelyn Worthington and Annie Racke and 11 grandchildren and great-grandchildren. He was born on December 7, 1923 at his family home in Alexandria, KY on Jerry Wright Rd. (formerly Brush Creek Rd.). He had two wonderful parents, William and Louise Racke, and two sister, Carrie and Louise. When he was three, he moved to his family farm on Persimmon Grove in Alexandria where he lived for 85 years until he moved to River Valley Nursing Home. As a child he remembered that he loved to play in the dirt and always wanted to be a farmer. He attended Maple Valley School which was located at the end of their farm. Growing up, he loved horses and had a horse named Dolly and a mule named Buck. As he got older, his first job was milking cows on their farm. He also liked to go to the drive-in movies (Pike 27). When he got out of school, he went to agriculture training in Lexington, KY. In 1945, he was in the United States Army and was deployed to Japan. Two days before his deployment, he met a beautiful lady named Juanita Clark in downtown Cincinnati, OH while he was with one of my fellow servicemen, Jerry Filpot. When he returned from service, just shy of 1947, he married Juanita Clark. They lived on the family farm where they raised dairy cows. They had three boys by the time they were 30 years old and they had six children all together. His wife became sick when their children were young and he became a single father years ahead of his time. From the children they had together, they now have twelve beautiful grandchildren. The words of wisdom he would like to pass on for the younger generastions are, "Always let your children become what they want to be, not what you wish them to be; but always be happy." The Words of Wisdom that he would like to pass along to his children, grandchildren and great-grandchildren are, "Always give 100% of yourself; always be honest; always care for others as you would yourself; always respect yourself and others; always love yourself because if you can't love yourself, you can't love others; always share your wealth and give back so others may have a nice life; and have no regrets!" Connley Brothers Funeral Home in Latonia, KY is serving the family. Services will be private. Entombment will be in the Kentucky Veterans Cemetery, North in Williamstown, Kentucky. Memorials are suggested to the American Cancer Society c/o cancer.org. Online condolences may be expressed on Facebook or at www.connleybrothersfuneralhome.com