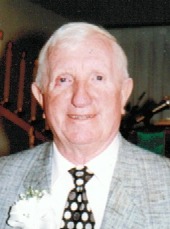 William “Bubby” Wilcoxson, 95, of Taylor Mill, KY, formerly of Latonia, KY passed away on Saturday, February 25, 2017. He proudly served his country during WWII in the U.S. Army and retired as a Supervisor from Cincinnati Bell Telephone after 38 years of service. Bubby was a member of the Runyan Memorial Christian Church where he served as a Deacon, he was a member of the former Golden Rule Masonic Lodge #345 F.&A.M. and he played Minor League ball for the Cleveland Indians. He played softball into his 80’s and regularly visited Rosedale Green to see old friends and the ill. Bubby was preceded in death by his beloved wife of 68 years: Mary Wilcoxson and grandson: Clint Wilcoxson. He is survived by his daughter: Sue (The late: Ron) Massie; son: Bill (Betty) Wilcoxson; grandchildren: Angie (Jay) Bain, Brian (Gina) Wilcoxson, Ericka Massie and Tiffany Massie and great-grandchildren: Destiny, Terrance and Claire. A visitation will take place on Wednesday, March 1, 2017 from 4:00 P.M. until 7:00 P.M. at Connley Brothers Funeral Home, 11 East Southern Avenue, Covington (Latonia), KY 41015. The funeral service will take place on Thursday, March 2, 2017 at Connley Brothers Funeral Home at 10:00 A.M. Interment with Military Honors: Floral Hills. Memorials are suggested to Runyan Memorial Christian Church, 3625 Decoursey Avenue, Latonia, KY 41015. Online condolences may be expressed on Facebook or at ConnleyBrothersFuneralHome.com

Sue, I was sad to read that your wonderful father had passed. My childhood memories of him, and your mom, are cherished keepsakes…..the trips to Coney Island…..They were both always so kind to me. I pray that you too find comfort in such memories.

Dear Billy, So sorry to hear of the passing of your father. What a great guy he was in so many ways. I have such fond memories of your parents at Runyan Memorial and the big part they played in that church. God bless you and your family.

So sorry for your loss. My thoughts and prayers are with you during this difficult time.