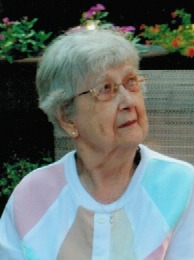 Wilma Irene Gillespie died on June 12, 2017 at the age of 91.
She was the last living charter member of the Church of Christ of Latonia (which moved to Hilltop Church of Christ in Taylor Mill and is now disbanded). She was an active member all her life and was dedicated to her church family and friends.
Wilma was an honorary Kentucky Colonel and had a great love of local history. She was a charter member of the Pendleton County Kentucky Historical and Genelogical Society and a lifelong geneology researcher. She loved recording any and all local events, leading to her involvement in and production of the photo album for her church (History of a Church), a photo album for The Colony (her place of residence), and a Craig family history for her grandson. She donated many of her maps, documents and other historic treasures to local libraries and historical societies before her death.
She has been an active participant in Holmes High School class reunion events until failing health kept her from attending. She helped put together a photo record for the class reunions and enjoyed them immensely.
Wilma was retired from St. Elizabeth Medical Center, for whom she originally worked as a volunteer Pink Lady, back in the 1960’s. She took a job in Medical Records and worked that position for many years until her retirement.
Wilma was pre-deceased by first husband: George Caldwell, and later, second husband: Arthur Gillespie. They had been childhood sweethearts back in Pendleton County and reconnected in 1970. She is survived by her son: Gary Caldwell; daughter: Linda (Dan) Baker; grandchildren: Chris (Lisa) Baker; great-grandchildren: Lexi and Sam; grand-dog: Roz and grand-cat: Cat Baker.
A visitation will be held on Friday, June 16, 2017 from 10:00 A.M. until 12:00 P.M. (Noon) at Connley Brothers Funeral Home, 11 East Southern Avenue, Covington (Latonia), KY 41015. Interment will be at the family’s convenience at Bethel Cemetery in Pendleton County, where she will rejoin her parents.
Memorials are suggested to Kenton County Libraries in Wilma’s name.
Online condolences may be expressed at ConnleyBrothersFuneralHome.com

So Very sorry for your loss. I knew Wilma from working with her in medical records at St. Elizabeth Medical Center. She was always a very nice lady. I wish Your Family Peace knowing She is now in Heaven with our Lord. Prayers !