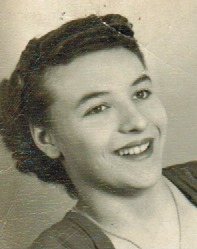 Wilma Faye Robinson, 80, of Covington, KY, passed away on Monday, March 9, 2015 in Fort Lauderdale, FL. She was a retired controller with Stouffer’s Restaurant. Wilma enjoyed bowling, knitting, crocheting and crafts. She was preceded in death by her Husband: Charles T. Robinson. Wilma is survived by her Daughters: Betty Robinson of Boston, MA, Ellie (Kevin) Lowery of Florence, KY and Beverly Carpenter of Fort Lauderdale, FL; Son: Raymond (Pamela) Robinson of Erlanger, KY; Sisters: Phyllis (Robert) Kirk of Independence, KY and Dorothy Turner of Dry Ridge, KY; Brothers: Danny (Jean) Stevens of Independence, KY and Roger (Opal) Stevens of Georgetown, KY; 8 Grandchildren and 8 Great-Grandchildren. Visitation will be on Friday, March 13, 2015 from 9:30 AM until the Funeral Service at 11:00 AM at Connley Brothers Funeral Home in Latonia, KY. Interment will be in Mother of God Cemtery in Fort Wright, KY. Memorials are suggested to the Charity of the Donor’s Choice. Online Condolences may be expressed at www.connleybrothersfuneralhome.com

May she now rest in peace… F-o-r-e-v-e-r. Our time will come soon enough. My sympathies to the family.

Our thoughts and prayers are with you. All of your friends at Personal Touch Home Care